Celebs News: Mampintsha to Launch his own Brand of Gin - Taxi Times

The nation’s tree has fallen

Babes Wodumo – Mampintsha is the only one who understands me

Zahara Loses another Loved One

Mampintsha has taken his hustle to a whole new level by adding ‘entrepreneur’ to his biography. The muso has announced that he will be launching his own brand of gin, Original Shandis Gin.

Taking to his Instagram, Shimora posted a video saying his Original Shandis Gin will be dropping in December and asked his fans to support him as he elevates his hustles. He did mention that he is still in the process of doing some final mixes before the ‘big’ launch.

Asking for his fans to wish him luck as he tries out a new business venture,
I’m dropping my new gin in December. Details dropping Soon. UNKULUNKULU PLS BLESS MY HUSTLE. WISH ME LUCK MZANSI.”In a previous post, he committed himself to grow and becoming a better person. He wrote, “The goal is to make everything around me grow…Including myself.”

This is not his only hustle, apart from being a West Ink boss, he had started his own food business called Emakhishini. He had flooded his Instagram wall with pictures of the different cuisines asking people to support local also adding contact number. His food business is based in Elmont.

Next Breaking News: President Ramaphosa called to step down 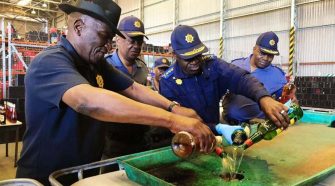