Taxi driver shot dead on N11 near Modelkloof in KZN

To wear or Not to wear a mask

Somizi reveals there are straight guys who want him, wish he breaks up with Mohale

SA citizens who were quarantined reunite with families

South African media personality, Zodwa Wabantu, got herself into a bit of trouble after fans were left wondering why she was a no show at a recent event. The reality star, who was scheduled to appear at an event in KwaMashu, Durban on Sunday, 27 September 2020, admitted to running later after she got caught up with bae.

Zodwa took to Instagram to apologize to fans, blatantly stating, “F*cken Tired. I had S.e.x at Nelspruit with Bae drove Crazy to Reach Airport For Babes Wodumo’s event in KwaMashu. Girls trying to put Something on the Table.”

In her video, she spoke directly to Babes Wodumo, explaining that would still be coming through to the event, despite being exceptionally tired, because ultimately that is what friends are for. She clarified that although she was being questioned for being late, she was in fact on her way and fans could be rest assured that she would not be a no-show.

The Zodwa Wabantu: Uncensored star has been open about her relationship status and s.e.x life in recent months, after her public breakup with ex-boyfriend, Vusi Buthelezi. She has let her followers know that despite being derailed in the love depart following Vusi’s fraudulent behaviour, the trauma from that relationship has not slowed her down at all.

Zodwa has been hinting that she is in love for a while now, but has preferred to keep the full identity of her bae to herself for now. In August 2020, she shared further insight into her new relationship, with a post captioned “He’s a businessman I’m just his weapon B*tch my bae.” Zodwa has yet to reveal a full image of her man, however it has been speculated that he is not a Ben-10, much like her past relationships.

Even though the public don’t know who exactly he is, one this is for sure – Zodwa’s love tank has been consistently filled throughout the lockdown. In August 2020, Zodwa Wabantu, was caught flaunting her body for all the neighbours to see, as she posed almost naked on her boyfriend’s balcony. In true Zodwa style, her caption explicitly stated that was visiting her boyfriend to give him the V and leave. She stated, “You don’t Enter a Man’s House with Only a P*ssy. We offer that thing P*ssy for Free. Boyfriend house, I’m just here to Deliver Only & Leave.” 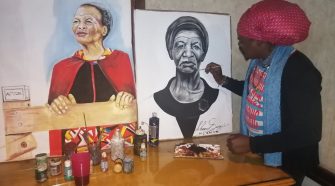