Petrol attendant airlifted to hospital after being shot in Centurion robbery

In the early hours of this morning, police officers from Pongola SAPS arrested two suspects aged 32 and 34 for possession of dagga. The men were charged and will appear in the Pongola Magistrates’ Court on Tuesday, 28 April 2020.

Police officers were manning a roadblock on the N2 freeway when they noticed an approaching vehicle that stopped and switched off its lights a short distance away from the roadblock. Police approached the vehicle and found two men inside the vehicle. They informed police that they are employed at a funeral parlour and that they are transporting a corpse. A search was conducted and police uncovered 30 concealed packets of dagga inside the coffin. The total stash weight in at 80 kilograms. The suspects were immediately arrested and detained at the Pongola police station for possession of dagga.

The KwaZulu-Natal Provincial Commissioner, Lieutenant General Khombinkosi Jula commended the police officers for their alertness and persistence to maintain law and order which led to the arrest of the suspects and the recovery of the dagga

Next Congregants arrested at religious gatherings in two separate incidents 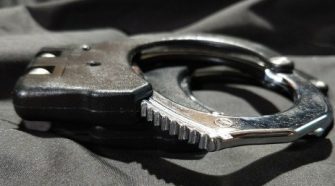 2 arrested for possession of human leg, knee and placenta