Drug addicts bound with chains and kept against their will

Law enforcement agencies currently have no plan on scuppering the taxi industry’s move to disregard lockdown regulations by loading the maximum capacity in taxis.

Johannesburg Metro Police Department spokesperson told Sowetan on Monday that they had not received directives to impound taxis that are violating lockdown regulations.

“We haven’t received a notice to act as yet with regards to impounding taxis, but we may know at a later stage,” Minnaar said. He was speaking on the backdrop of the South African National Taxi Council (Santaco) announcement during a virtual briefing on Sunday after it accused Transport Minister Fikile Mbalula of failing to take their concerns seriously.

Commuters at Bara Taxi Rank in Soweto said they faced a double edged sword regarding the taxi industry’s decision to do away with loading passengers at 70% capacity.

Nthabiseng Mokoena, who works in Southdale said she was happy that the taxi industry was taking matters into their hands.

“This means that they won’t be striking anymore and they wont increase fares. Its understandable why taxi operators are doing what they are doing, they need to make money as well,” Mokoena said. 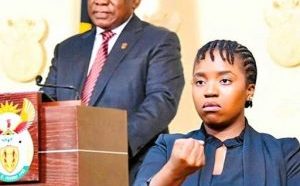 The woman behind the gestures