News: 1 Million employees in the liquor industry blindsided by the ban on alcohol.

Satanic Church founder was a sangoma before venturing into satanism

Zahara Loses another Loved One.

Zahara was born as ‘Bulelwa Mkutukana’ in the Phumlani Informal Settlement outside of East London.  She lived with her parents Nokhaya and Mlamli Mkutukana.  She displayed her love for singing at age 6. Zahara first came to wider attention when she was appointed the lead singer of a local Sunday school choir in Phumlani. Her stage name means “blooming flower”

Now, Musician Zahara has lost another loved one.  In just a matter of weeks after burying her brother. Zahara is so heartbroken that she has to question God as to why is she losing people that are dear to her heart.

Weeks ago she posted pictures attending her big brother’s funeral that had a large soldier presence.

Trying to numb the pain by working on her album, and scoring gigs the news of another loved one’s passing left her heartbroken.  In July 2014, Zahara’s younger brother was murdered in East London. According to Zahara, she went through a period of depression after his death but recovered enough for the 2015 release of Country Girl.

Judging from her caption, it is unclear who she is referring to as she posted a picture of herself along with 2 female singers.

“Farewell Queen, power to you. Okay God me and you now, what’s wrong so we can say sorry. I’m loosing people right and center,” she cried. 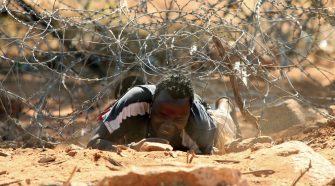